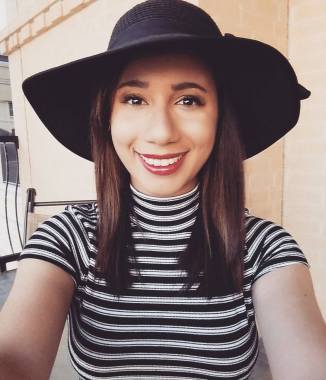 Daniela Gonzalez is  St. Mary’s University alumna by completing a bachelor’s degree in Communication Studies. Born and raised in El Paso, Texas, Gonzalez was actively involved in her community by combining both her passion in helping others and the media through several public events; that included providing face painting, another of her passions, and advertisements of the events.

Gonzalez considers herself to be a shy and introverted person, thus motivating her to apply to Valle Verde Early College High School, a small dual-credit high school where she had the opportunity to graduate with a high school diploma as well as an Associate’s degree of Arts. At VVECHS, Gonzalez was involved in a variety of extracurricular activities including National Honor Society, Future Business Leaders of America, French Club and Media Club. Gonzalez participated at the graduation ceremony of class of 2016 in June.

College has always been a part of Gonzalez’s plans. Initially, St. Mary’s was not considered an option because of the tuition cost. However, Gonzalez earned the school’s Madeline scholarship, thus making the opportunity to attend St. Mary’s become a reality. Gonzalez is actively involved in the St. Mary’s community by working as the Layout and Design editor of the school’s award winning newspaper, The Rattler.

During her first year at St. Mary’s University, Gonzalez worked as a legal translator at the Center for Legal and Social Justice, where she aided law students by compiling and translating legal documents to aid their cases. During the summer of 2017, Gonzalez interned at Las Americas Immigrant Advocacy Center where she aided attorneys and legal representatives with asylum and citizenship cases to help immigrants come into the U. S. without a problem. She also helped with the center’s mass media by updating Las America’s website and brochure information to share to potential clients.

She is currently in El Paso, TX ready to tackle on the next challenge for her graphic design/communications career!